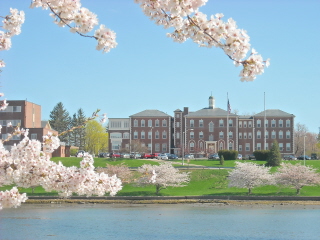 In 2012, the 100th anniversary of the gift of the iconic Washington DC cherry trees to the US by Japan, the Japan-America Society of New Hampshire learned that those famous trees were a direct result of the Portsmouth Peace Treaty, negotiated in Portsmouth NH in 1905, ending the Russo-Japanese War. Research showed that the Mayor of Tokyo, Yukio Ozaki, who facilitated the cherry tree gift, described in his autobiography a desire to thank the US for its role in ending the War. That conclusion resulted in a 2012 op-ed in the Washington Post by the Ambassador of Japan to the US, noting “Tokyo Mayor Yukio Ozaki, who was thankful for the role the United States had taken preparing negotiations leading to the Treaty of Portsmouth, which ended the Russo-Japanese War, seized this opportunity.”

The Japan-America Society arranged to receive cherry trees descended from the Washington trees in commemoration of the 100th anniversary of the diplomatic gift and began planting those trees at key sites related to the Treaty history, as a living memorial to the Portsmouth Peace Treaty and the citizen diplomacy involved in reaching the successful conclusion. In 2015, for the 110th anniversary of the Treaty, cherry trees were planted around the city of Portsmouth and throughout the state. Although President Theodore Roosevelt never came to Portsmouth, having promised Japan and Russia that he would not be at the table, won the Nobel Peace Prize in 1906, for orchestrating the negotiations.

“The cherry trees are famous as the symbol of friendship from Japan, a gesture of people-to-people diplomacy,” said Charles B. Doleac, president of the Japan-America Society of New Hampshire. “The Japan America Society of NH showcases cherry trees that are directly associated with the Treaty and the iconic Washington trees to keep the spirit of the Portsmouth Peace Treaty and its many branches of citizen diplomacy alive.” 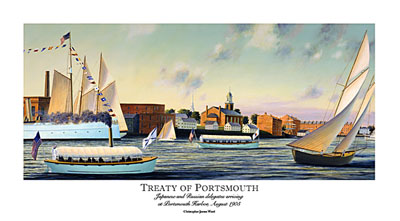 To raise money for the memorial, an original oil painting by celebrated maritime painter, and seacoast resident, Christopher J. Ward was commissioned. A limited edition of 900 museum quality prints has been published by the Memorial Fund for local, national and international distribution and sale.

In 1905 in Portsmouth, New Hampshire, an
uncommon commitment to peace became a common virtue.

PORTSMOUTH, NH  September 5, 2005 marked the 100th anniversary of the signing of the Treaty of Portsmouth, a remarkable event which brought to an official end the largest, bloodiest, and most costly war in the history of the world up to 1905. The peace process that ended the war between Japan and Russia was orchestrated by US President Theodore Roosevelt  who won the Nobel Peace Prize in 1906 for his efforts. The story of how the treaty came to be signed has ramifications to this day.

To celebrate the treaty, and the efforts that led up to it, the Portsmouth Peace Treaty Anniversary Committee has established a Portsmouth Peace Treaty Memorial Fund, the proceeds of which will enable the commissioning of a memorial to be located in Portsmouth. The memorial is to be a permanent reminder of the event and a celebration of the roles Roosevelt, Japan, Russia, the US Navy, the State of New Hampshire, and the citizens of Portsmouth played in the treaty negotiations.

According to the Japan-America Society of New Hampshire, one of the organizations involved with the Memorial Fund Committee, the Treaty exemplifies the ability of local citizens to mediate informally international disputes. As hosts for thirty days in August 1905, the State of New Hampshire, the people of Portsmouth, and the United States Navy fostered goodwill between Russian and Japanese delegates during the critical peace negotiations that ended the Russo-Japanese War. The Portsmouth Peace Treaty provides an example to the world of the enlightened foreign policy for peace by Japan, Russia, and the United States. It is considered one of the most powerful symbols of peace in the world, and the most significant, shared peace in the history of Russia, Japan, and the United States.

"In 1905 in Portsmouth, New Hampshire, an uncommon commitment to peace became a common virtue."

The committee commissioned a painting by celebrated maritime painter, and seacoast resident, Christopher J. Ward, from which limited edition prints were made. The painting depicts the arrival of the Russian and Japanese delegates in August 1905 and their transit through Portsmouth Harbor transit, in US Navy motor launches, to the Portsmouth Naval Shipyard where the Treaty was negotiated and signed. It includes images of the USS Dolphin, the North Church steeple, St. John's Church, Merchant's Row storehouses, the Moffatt-Ladd House, the SS Mineola Isles of Shoals ferry, and other historically accurate sights of 1905. A limited edition of 900 individually signed and numbered prints is now available. To view an image of the print, click here. Purchasers of the prints will be credited as "Founders"  of the Memorial and their names will be listed on the permanent Portsmouth Peace Treaty website (click here) and in a commemorative piece.

Individually signed, numbered, and embossed prints have been produced on Arches Infinity sheets, a museum quality archival paper. A limited number of the prints were remarqued by the artist. A certificate of authenticity from the Peace Treaty Memorial Fund accompanies each print.

Matted and framed prints (neutral linen mat and gilded rope edge wood frame) are also available through the Japan-America Society of NH. These framed prints are 25" x 39" overall and are $950. Telephone: 603-436-4010.

The Japan-America Society of NH is currently creating a Portsmouth Peace Treaty Living Memorial in the form of cherry trees. These trees, given to JASNH on the 100th anniversary of the planting of the iconic cherry trees in Washington DC , are descended from those trees. Portsmouth is one of just 32 cities nationwide to receive the trees. Research uncovered in 2012 determined that the Washington trees were given to the US by Japan in thanks for diplomacy that ended the Russo-Japanese War with the Portsmouth Peace Treaty. For more on the Living Memorial project, click here.