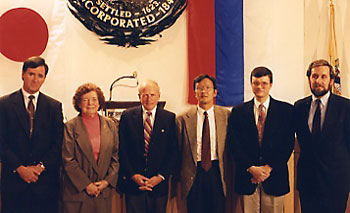 CHARLES B. DOLEAC, President
The Japan-America Society of New Hampshire

Welcome to the Second Peace Treaty Forum, being held at the Portsmouth City Council Chambers, under the Seal of the City of Portsmouth, and also underneath the flags of two great powers, Russia and Japan who, in 1905, negotiated an end to a conflict between them, here in Portsmouth, New Hampshire.

The Portsmouth Peace Treaty Forum will be the second formal meeting between Japanese, Russian and American scholars and diplomats in Portsmouth since the negotiation of the Treaty in 1905. The Treaty is considered one of the most powerful symbols of peace in the Northern Pacific region, and the most significant shared peace history for Japan, Russia and the United States in Asia. The Forum will be the second in a series of forums sponsored by the Japan-America Society of New Hampshire, that will explore through Japanese, Russian and American perspectives the history of the Portsmouth Peace Treaty, and its relevance to current issues involving the Northern Pacific rim. And in that regard, we allow our speakers to choose the issues they wish to discuss, and that is in keeping today with the program format. The Forum will provide modern scholarship by this format on international problems in the spirit of the Portsmouth Peace Treaty.

The Treaty provides an example to the world of the enlightened foreign policy for peace by Japan and Russia in 1905, at the turn of the last century, as we are now approaching the turn of the next century. For the people of New Hampshire and people of Portsmouth, the Treaty also exemplifies the ability of local citizens to informally mediate international disputes. For as hosts for thirty days in August of 1905, the State of New Hampshire, the people of Portsmouth, and the United States Navy fostered good will between the Russian and Japanese delegates during the critical peace negotiations that ended the Russo-Japanese war. As we like to say as theme for this Forum, in 1905 in Portsmouth, New Hampshire, as a an uncommon commitment to peace became a coon virtue, and the Portsmouth Peace Treaty Forum will commemorate and continue that tradition.

The purposes of the Forum are, therefore, threefold. One, to learn more about the history of the Treaty, and in learning more about the history of the Treaty, hopefully use the spirit of it for issues of today. For supporting this purpose, we would like to thank The Center for Global Partnership of the Japan Foundation for funding this event. The second principal purpose of the Forum is to educate the people of New Hampshire about its own history. We would like to thank the New Hampshire Humanities Council for funding this purpose of the Forum. The third purpose of the Forum is the spirit of what happened in Portsmouth in 1905. For what did happen here is unusual, I think, in international mediated negotiations for, without any prior international mediation experience, the local people of New Hampshire hosted the negotiations and, as hosts, created the atmosphere for the success of the Peace Treaty. If Portsmouth can host peace negotiations without prior experience, then other cities throughout the world can do the same. There is something else to this forum that is a bit different, and that is it is not just one conference. It is a series of conferences that build upon one another. Videotapes of the proposals made here today and videotapes of the prior forums are available for subsequent forums to review and comment upon. There will be a continuing dialogue based on comments of past forums in each future forum. For that "continuing forum" format, we are indebted to the work of a number of people; but we would like to particularly thank here today Consul Hiroshi Shiojiri of the Japanese Consulate in Boston, who helped us with administrative guidance and understanding of how international events can be affected by other than formal diplomats.

Now, why Portsmouth in 1905? It may seem unusual that a city of about 20,000 people that had very little international history would be chosen for the Portsmouth Peace Treaty negotiations. But I think that one of the reasons that Portsmouth was chosen in 1905 is something that has recently entered into the lexicon of political discourse, and that is social capital. Social capital is the ability of citizens to affect change because they have a number of institutions in their community that provide a means for everyone to be involved and to effect change. Portsmouth has a rich history, a rich, full civic tradition, many local charities, churches, lodges and numerous artistic and other non-profit groups, - a lot of social capital. For social capital to flourish, it needs political institutions that foster it. Here today, embodying that civic tradition, representing that political institution, is Mayor Eileen Foley of the Portsmouth City Council.