THE EXHIBIT: "An Uncommon Commitment to Peace: Portsmouth Peace Treaty 1905" summarizes the Russo-Japanese War and focuses intensely on the month-long negotiations in Portsmouth NH in 1905.

Follow in the footsteps of the Russian and Japanese diplomats on a self-guided Portsmouth Peace Treaty Trail Tour, with a free map available at the John Paul Jones House and in other downtown visitors' centers.

Click on each link below for the exhibit panels.

Causes of the War, Part 1

Causes of the War, Part 2

Russia and Japan, Ready for Peace

Key Participants in the Road to Peace, Part 1

Key Participants in the Road to Peace, Part 2

Key Participants in the Road to Peace, Part 3

Lasting Impressions of the Conference and Portsmouth

An Uncommon Commitment to Peace: Portsmouth Peace Treaty 1905 -- the central exhibit -- explores the causes of the Russo-Japanese War, the conflict and the multi-track negotiation process consisting of:

The Exhibition features images of the war and the peace process, artifacts from the time and a timeline showing the relationship among the formal diplomacy, back-channel diplomacy and local events that led to the Treaty signing on September 5, 1905. Artifacts include a pen used to sign the Treaty, the chair in which the Japanese diplomat, Baron Komura sat, and other objects loaned from various collections.

For 30 days in Portsmouth, New Hampshire, an uncommon commitment to peace because a common virtue. The Portsmouth process is an example of the ability of local communities to be involved in resolving international disputes.

The exhibition was made possible by a grant from the Center for Global Partnership of the Japan Foundation to the Japan-America Society of New Hampshire and is hosted by the Portsmouth Historical Society at its John Paul Jones House Museum on the corner of Middle and State Streets in downtown Portsmouth, NH. Open daily 11 am - 5 pm through October 31. 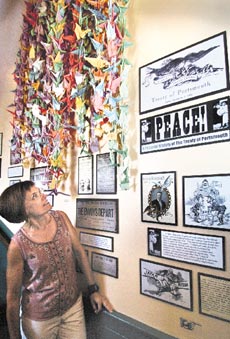 Children's Museum exhibit designer Sue Kaufmann with some of the collected historical images and strings of peace cranes created by schoolchildren.(Photo courtesy of Portsmouth Herald.)

Children's Museum of Portsmouth, "PEACE! A Pictorial History of the Portsmouth Peace Treaty"

The Children's Museum of Portsmouth explored the subject through visual images that all ages could appreciate. Displayed in the Museum's Gallery 280, the exhibit used reproductions of fascinating period photographs, political cartoons, and newspaper headlines and clippings, presented picture-book style with brief annotations, to acquaint visitors with the little-known story of this ground-breaking international and local event. Punctuating this informal retelling were colorful strings of origami cranes, international symbols of peace based on an old Japanese legend.

The Children¹s Museum of Portsmouth, 280 Marcy Street, is an interactive arts and sciences museum with 9 hands-on exhibits.  Hours: Monday­ Saturday  from 10 AM to 5 PM and Sundays from 1-5 PM. Admission is $6 for children and adults, $5  for seniors, and free for members  and children under 1. For more information, 603 436-3853 or visit www.childrens-museum.org. 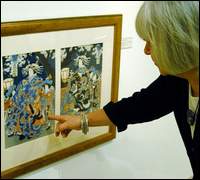 Wentworth-Coolidge Mansion, "Peace and the Pursuit of Pleasure" Exhibit

Exhibited August 21 through September 5, 2005, "Peace - and the Pursuit of Pleasure" was an exhibition of antique Japanese woodblock prints from the 18th and 19th centuries, centuries of general peace and prosperity in Japan. Through the woodblock prints the exhibit addressed the beneficial impact on domestic life of national and international peace. The exhibit was presented at the handicapped-accessible Coolidge Center for the Arts at the Wentworth-Coolidge Mansion and was funded by a grant from the Greater Piscataqua Community Foundation. The Center is open from 10 am to 4 pm, daily; and 1-5 pm on
Sundays.

Related tours in the Mansion examined New Hampshire Royal Governor Benning Wentworth's prosecution of war and peace during the 18th century, in terms of the inhibiting effect of the almost perpetual warfare that prevailed in New Hampshire and New England during his administration on domestic tranquility and prosperity. 375 Little Harbor Road, Portsmouth.  Contact: 603-436-6607, www.WentworthCoolidge.org

Portsmouth Athenaeum, "War and Peace: Images from the Russo-Japanese War 1904-05"

This exhibit was made possible by Frederic A. Sharf, a collector and art scholar from Chestnut Hill MA, who loaned the Athenaeum 32 Japanese and 3 Russian lithographs depicting the war and the peace. Mr. Sharf opened the exhibit with a lecture on the collection on June 16. A catalogue of this exhibit is available through this website. Click here for ordering information. Click here to visit the Portsmouth Athenaeum site on the exhibit, with images.

The Old York Historical Society presented special exhibits, June 4 - August 27th at the Elizabeth Perkins House on the York River, in commemoration of the Centennial. Site of a much-noted 1905 garden party and reception for the Russian and Japanese delegations to the Peace Treaty negotiations at the nearby Portsmouth Naval Shipyard in Kittery, the Perkins House retains in its collections notable objects and memorabilia associated with the event.

An exhibit on the garden party included a number of period photographs, the guest book for the event, and letters to Mrs. Newton Perkins, Elizabeths mother, from the Russian and Japanese delegations.  The August 1905 garden party was a fund-raiser for the establishment of the York Hospital, and each delegation sent a donation, thus ensuring the stability of that institution at the time of its founding.  The Dining Room table in the exhibit was set with Russian and Japanese porcelains brought to the house after trips to those countries by the Perkins in the late nineteenth and early twentieth centuries.

In August, the Visitors Center hosted a small exhibit centering on the treaty itself and featuring one of the original chairs used by delegates during negotiations at the Shipyard.  Later presented to Miss Elizabeth Perkins, the chair has recently been cleaned and conserved to preserve its original finish and upholstery.

The original garden and grounds where the fete was held were the subject of an exhaustive restoration in 2000, and during August and September were decorated with peace gates and planters as they were for the lawn party in 1905.

On August 16th, OYHS hosted Peace Day! for kids aged 8-12) and on August 18th, a Peace Day! for kids aged 5-7.  To celebrate the Russo-Japanese Treaty at the Perkins House, kids enjoyed a tea party, learned about Asian and Russian cultures and made a craft to take home. Perkins House Visitors Center, 1-2:30 p.m. Program presented in collaboration with the York Public Library.