Concord, New Hampshire and the Political Influences on the Selection of Portsmouth 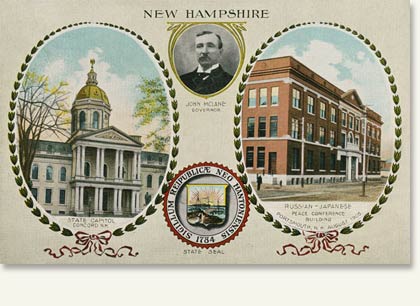 The peace conference that resulted in the Treaty of Portsmouth would never have come to be associated with New Hampshire without the quick action of citizens and state government working together to seize the opportunity.

In June 1905 when word came that the President was looking for an alternative to the summer resorts of Newport and Bar Harbor -- where socialites might snub the Japanese in favor of Russian nobility -- Anderson and Pierce, the owners of the recently-opened Mount Washington Resort at Bretton Woods, NH, offered to host the conference at no charge.

On June 21st, Governor John McLane and the New Hampshire Executive Council quickly approved that suggestion and prepared a formal invitation for consideration by the State Department. The story of the role New Hampshire's Governor John McLane and NH Secretary of State Pearson played in traveling to Washington to deliver their invitation to the Russian and Japanese embassies is related in the History of the Treaty. The letter sent to William Eaton Chandler, former US Senator for the state, former Navy Secretary and friend of Roosevelt's is also part of this record. The Manchester Union's September 9th story and further research in Chandler's papers at the NH Historical Society fill in more details.

Chandler's diary notes receipt of the Governor's letter on June 22nd -- a date that also records a meeting with President Roosevelt, though the recorded topic of discussion was the railroad issue.  Meanwhile, Chandler had telegraphed McLane that the hotel owner and NH Secretary Pearson should come to Washington to facilitate the overture in person. Senator Gallinger instantaneously telegraphed his support to US Secretary of State John Hay, who on June 23rd told Chandler to appeal directly to the Russians and Japanese. On Saturday, June 24th, the Governor and Secy Pearson arrived at Chandler's office where they were met by NH Senator Burnham and messengers were sent to the respective embassies. As Chandler's diary records, "Saw Cassini & Takahira with Pearson & Gov. McLane. At 3 1/2 went with Sen Burnham & Sec State E.N. Pearson to see Japanese Minister Takahira & Russian Minister Cassini. They were very gracious." Cassini told the men he was being transferred back to Russia but that he would use his "good offices in interesting Rosen [Baron Rosen, his replacement as Ambassador] in New Hampshire's offer."

Meanwhile the same day, Gallinger's telegram of the 22nd to the State Department had been answered by Third Assistant Secretary Herbert H. Peirce who said, "Have submitted matter to President and will give every assistance possible to the representative of the Governor of New Hampshire on his arrival."

By the following Thursday, June 29th, Gallinger was notified by the State Department that Portsmouth might be preferred. Peirce noted that though New Hampshire's invitation had been "most favorably" received that that there were "serious objections" to the distance and security of the White Mountains.

Acting quickly, McLane and Pearson traveled to Portsmouth to seek the assistance of Judge Calvin Page, executor of the Frank Jones Estate and owner of the Wentworth Hotel -- the suitable replacement for the Mount Washington in the preferred location of Portsmouth and its Navy Yard. Judge Page immediately agreed to accommodate the diplomats -- and to absorb the expense -- and Pearson wrote a new letter with the revised details to the State Department on July 1st.

On July 10, 1905 word came that New Hampshire's invitation was accepted and that Peirce would visit Oyster Bay, and then Portsmouth, to make the arrangements.

Thanks to the leadership of the Governor, Executive Council, Secretary of State and Congressional delegation, New Hampshire as host and the people of New Hampshire were the ones that both plenipotentiaries thanked, saying:“They have done more for us than we could ever expect from anyone and we shall always thank them for it.”

As the Manchester Union reported on September 9, 1905 when the ink on the Treaty had dried, "The only place from which an invitation came in the name of a state was New Hampshire."

But who was Chandler? 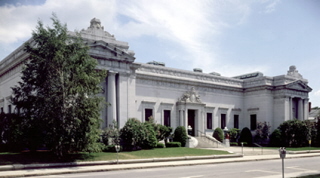 William Eaton Chandler was born on December 28, 1835 on the site at 30 Park Street, Concord, opposite the New Hampshire State House that is now occupied by the New Hampshire Historical Society’s Tuck Library. The Society’s library now holds a collection of Chandler’s papers including his diary -- below. As Secretary of the Navy, distinguished Senator from New Hampshire and friend of Theodore Roosevelt, Chandler would play a role that is just being uncovered in the selection of Portsmouth as the location for the 1905 peace conference ending the Russo-Japanese War.

Growing up in the family home in the shadow of the State House, it was perhaps inevitable that Chandler’s life would be influenced by politics. After studies at what later became Pembroke Academy (6 miles from Concord), Chandler attended Harvard Law School and received his degree in July 1854. From September to February he served as Librarian of the Law School, then returned to Concord where he set up his law practice in 1855. Over the course of his life, Chandler would become perhaps the key operative in the New Hampshire Republican party. He was elected party Secretary on June 19, 1856 and in 1862, State Representative. In 1863 Chandler orchestrated the election of Joseph Gilmore (his father-in-law) as Republican Governor after characteristically organizing a convention of “War Democrats” with his friend John Clark, owner of the Manchester Mirror, to split the Democratic ticket. Chandler was elected Speaker of NH House in the same year. His association with the Navy and the Navy Yards, including Portsmouth, began in 1864 when Navy Secretary Gideon Welles named Chandler counsel for the US Government, investigating Navy yard corruption. Successful, he was appointed in March 1865 to the new post of Naval Solicitor and Judge Advocate. “Not entirely happy” with that post, he was pleased to be named on June 5, 1865, Assistant Secretary of the Treasury by Secretary of State William Seward, after Lincoln’s assassination. (At the same time, Denison who was 'not well pleased' in his former position in the newspaper business was also working in the Treasury Department). In 1867 Chandler resigned from Treasury and opened a law office in Washington DC. He vigorously backed Grant for President in 1868. Because Chandler led the Platform Committee at the New Hampshire Convention in December 18, 1867 and committed the party in the State to Grant he assured that New Hampshire’s “first in the nation” election would provide the groundswell Grant needed to win. 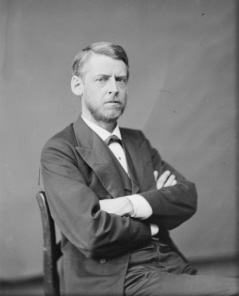 Chandler was appointed Secretary of the Navy on April 3, 1882 and almost single-handedly led the much-needed modernization of the fleet and its conversion from wood to steel. Of 37 ships in service all but 4 were wooden. On May 2, 1883, the Naval Advisory Board authorized his recommendation to build the first four steel ships, the “ABCD” ships Atlanta, Boston, Chicago and Dolphin (the last, in 1905, would convey the Japanese delegates from Oyster Bay NY to Portsmouth for the peace conference). In 1884 he organized the Navy’s rescue of the Greeley Arctic expedition and welcomed Greeley and the other 5 survivors home at Portsmouth Naval Shipyard on August 4-5th.

In 1887 Chandler was appointed Senator from New Hampshire to fill the term of Austin Pike who had died. Elected in his own right in 1889, he was re-elected in 1895. He was a staunch defender of civil rights during this era of the Reconstruction. In 1901 Chandler lost his re-election bid and was named president of the Spanish Treaty Claims Commission by President McKinley. He served that Commission until 1907 while becoming one of President Theodore Roosevelt’s Washington friends and advisors.

Among other interests they shared a strong belief that a modern Navy was essential to America's position in the world. A letter from Roosevelt, a former Assistant Secretary of the Navy to Chandler reads, “My dear Senator, In the dreary waste of my ordinary and unofficial correspondence, any letter from you is always a veritable oasis, even if it is about armor plate.” Later, according to biographer Richardson, “Although no longer representing New Hampshire, through his close personal intimacy with President Roosevelt he was not entirely without influence in matters relating to the State; he exerted himself to obtain favorable action for the Portsmouth Navy Yard and the Portsmouth harbor. [A]pplicants appealed to him because of their idea... that ‘you are nearer to the President than any New Hampshire man in Washington.’”

In trying to determine why Portsmouth was selected by Roosevelt as the host for the peace conference seeking an end to the Russo-Japanese War, a key element is the June 21, 1905  letter from Governor John McLane requesting Chandler’s advocacy for the Treaty proceedings to be held in New Hampshire. This letter is McLane’s petition on behalf of the owners of the Mount Washington Resort, “hoping that you will be able to take the matter up and hoping that our State may be honored by a visit from these distinguished gentlemen.” 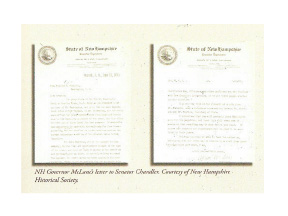 Once the venue was selected, Chandler did not have much active involvement in the proceedings, though he did seem to keep track of developments from his summer home in Waterloo (now a section of Warner, NH). 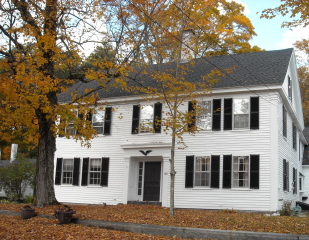 On August 23rd he and his son, Lloyd (a US Navy officer) traveled by train to Portsmouth where they dined with Page, Denison and Komura and toured the Shipyard with Admiral Mead. Staying at the Rockingham, Chandler, Coolidge and Page made a tour of the coast, visiting Little Boar's Head (in North Hampton) and Ft. Constitution (in New Castle). Of dinner at Wentworth with Denison, Komura, Sato and "another Japanese" he said "Komura talked freely at dinner." He also noted a quick encounter with another figure, who was in Portsmouth to document some of the peace conference details on film: "On 23rd at Rock[ingham] Ho[tel] saw and had a short talk with Thos A. Edison -- had not seen him for 30 years and introduced Lloyd." 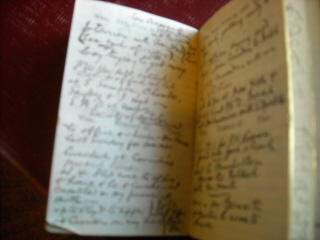 The next diary mention of the conference comes on August 30th, "Great news. Peace of Portsmouth" and then on September 6th Chandler records the details of his trip to Lancaster accompanying Denison to his hometown. "To Concord at 9. at 10:45 H.W. Denison arrived from Portsm. To Eagle [Hotel] and then to State House and State Library and about town. At 3:20 Denison and I to Lancaster... Long talk with H.O.Kent [Denison's former employer and host on this visit] ... drove with Kent and his brother Edward about Lancaster and over to Guildhall, D's birthplace. .. At 5 to H.O. Kent's to tea with him, Mrs. Kent, son and daughter." 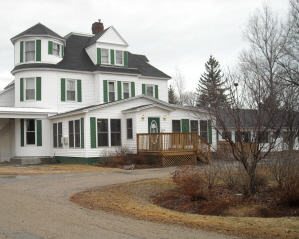 The old Kent homestead in Lancaster.

Then on September 8th he accompanied Denison to the Mount Washington, finally parting ways on the train on the 9th as Denison continued on to meet up with the rest of the Japanese delegation in New York and Chandler headed home to Waterloo. 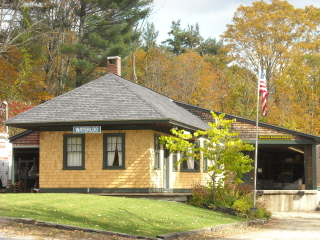 The close friendship between the President and Chandler is suggested by a diary entry the morning he made in the morning of the day he would call on the embassies with Pearson and McLane: "At 10 to White House about RR matters. Characteristic bold talk from him on RR rate question. Interview with President -- busy trying to get away [to the summer White House at Sagamore Hill.]" This would remain a central issue of their relationship, as suggested by an entry in Chandler’s diary on April 9, 1906: “At 9:30 to the White House; saw the President alone upstairs. Talked of railroad rates and many other things for more than an hour. He was very gracious.” Roosevelt enlisted Chandler, a longtime opponent of special railroad privileges to build a coalition to ensure passage of the Hepburn Bill allowing the Executive Branch to set railroad rates. Roosevelt later changed his mind and supported the Allison Bill on the matter, which embarrassed Chandler. He and Roosevelt had a falling out over how the matter was handled and were never as close again.