New Hampshire has two Sister City relationships with Japan: Portsmouth and Nichinan; and Hanover and Nihonmatsu. Both are directly connected because of Treaty history. Baron Komura, the lead Japanese diplomat at the peace conference in Portsmouth, was born in Nichinan. Kan’ichi Asakawa, a young history scholar at Dartmouth College, whowrote the first history of the causes of the Russo-Japanese War and came to Portsmouth to observe the peace conference, was from Nihonmatsu.

In 1985, on the 80th anniversary of the Treaty, the Mayor of Nichinan reached out to Portsmouth Mayor Mary Keenan to suggest a formal Sister City bond to strengthen the friendship begun in 1905. In 1986 a delegation of 21 Portsmouth citizens – including Eileen Foley who would become the city’s Ambassador to Nichinan -- traveled to Japan to ratify the formal agreement with the Mayor of Nichinan.

In April 2016, a delegation of 11 Portsmouth High School students and 8 adults traveled to Nichinan to celebrate the 30th anniversary of that Sister City agreement, hosted by Mayor Kyohei Sakita who visited Portsmouth in September 2015 to celebrate the Treaty 110th anniversary. The students reciprocated the dozen-plus Sister School visits exchanged with the Nichinan Gakuen Junior-Senior High School since 1997. Each August, a group of students from Nihonmatsu make their annual visit to host families in Hanover.

The historic marker is located on the Junkins Avenue causeway – halfway between City Hall and downtown, overlooking City Hall and the banks of South Mill Pond where the cherry trees grow. 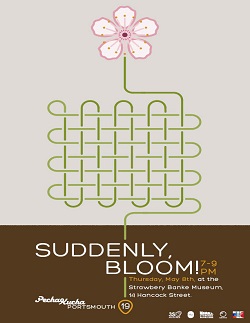 In 2014, JASNH and 3S Artspace hosted a Pecha Kucha night at Strawbery Banke on May 8. This performance form, that originated with a circle of young architects in Tokyo, gives each participant the chance to show 20 slides, with 20 seconds narration for each slide. The theme for the cherry tree Pecha Kucha is “Suddenly, Bloom! Out of adversity, great change, growth, and beauty can arise.” The free event takes place in the Strawbery Banke Visitors Center, 14 Hancock Street in downtown Portsmouth NH, starting at 7 pm. Food and drink available for sale through The White Apron Café at Strawbery Banke.

“The cherry trees are famous as the symbol of friendship from Japan, a gesture of people-to-people diplomacy,” said Charles B. Doleac, president of the Japan-America Society of New Hampshire. “The Japan America Society of NH showcases Portsmouth’s own cherry trees – that are directly associated with the Treaty and the iconic Washington trees to keep the spirit of the Portsmouth Peace Treaty and its many branches of citizen diplomacy alive. Each year, the Portsmouth Cherry Tree event celebrates our historic friendship with Japan with a different variation on the Cherry Blossom Festival theme.’” 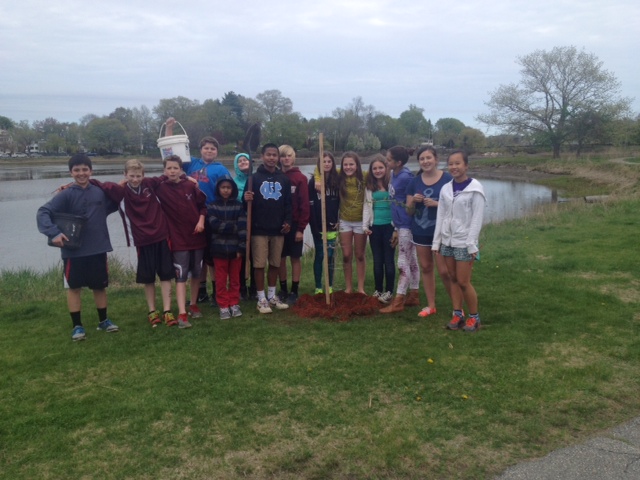 The new trees are cherry trees descended from the iconic Washington DC cherry trees -- give to the US in 1912 by Japan in thanks for the Portsmouth Peace Treaty, signed at the Portsmouth Naval Shipyard, that ended the Russo-Japanese War in 1905. The Japan-America Society of NH arranged for Portsmouth to be one of the 36 cities to receive trees on the 100th anniversary of the original gift. JASNH is working with the NH Division of Forests and Lands Urban  Forestry Center to plant them in Portsmouth at key Treaty sites and elsewhere as a Portsmouth Peace Treaty Living Memorial.