While Henry Willard Denison was much-publicized during the Treaty proceedings, especially during the final preparation of the document for signing on September 5th, the following details are based on two main sources: John Curtis Perry, who holds the Henry Willard Denison chair at the Fletcher School of Diplomacy at Tufts University and research done in primary sources from the time in Lancaster, New Hampshire. Confirmation that Denison visited his home town of Lancaster immediately after the peace conference was made thanks to Barbara Roberts, Librarian, Weeks Memorial Library in Lancaster. The Library hosted a presentation of the NHHC lecture, "Teddy Roosevelt's Nobel Peace Prize & New Hampshire" in March 2009. 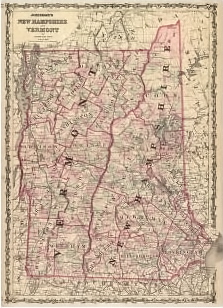 Henry Denison (center, standing) with key members of the Japanese delegation to Portsmouth was born in Guildhall VT and soon moved, with his family, across the river to Lancaster NH.

Henry Willard Denison was born at Guildhall Vermont on May 11, 1846, the son of Colonel John Paine Denison. In March 1860, the family moved across the river to Lancaster, New Hampshire where Henry attended Lancaster Academy. (A plaque marks the spot where it was located, behind the Weeks Library). In 1861-62, Denison worked for the Coos Republican newspaper (in offices above the Lancaster Savings Bank) as a "printer’s devil" employed by the editor and a family friend Colonel Henry O. Kent with whom he lived during his apprenticeship and the person he came back to visit after the Treaty signing. 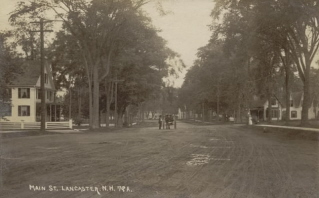 Denison then moved on to Philadelphia printer McKellar, Smith & Jordan -- but according to later accounts, was "not well pleased" there. Thanks to his father’s cousin, Charles Dana, Assistant Secretary of War under Lincoln, Denison secured a position in the War Department and later transferred to the Treasury Department as a Customs clerk. William Chandler of New Hampshire (and later NH Senator) was Assistant Secretary of the Treasury at the time and he and Denison began their lifelong friendship then. While at Customs, Denison studied law at Columbia College in Washington (later renamed George Washington University) where he received his degree. During this time, Denison roomed with later NH Congressman Henry M. Baker.*

In 1869 he went to Japan as a vice consul to the American consulate at Yokohama. Shortly after arriving, Denison was named acting consul. In May 1880, Denison accepted the invitation of the Japanese government to act as legal advisor to the Japanese Ministry of Foreign Affairs. In 1895 he participated in the negotiation of the Shimonoseki Treaty following the First Sino-Japanese War of 1894-95 and received the Japanese Order of the Sacred Treasure, Grand Cordon. In 1898 he helped conclude a treaty of friendship and alliance with Great Britain (a useful precursor to the development of treaty positions following the Russo-Japanese War of 1904-05); and in 1900, Denison represented Japan at The Hague.

In August 1905 Denison accompanied Japanese Ambassador Baron Komura to Portsmouth, New Hampshire and was responsible, with Privy Councilor De Martens, his Russian counterpart, for drafting the final form of the Treaty of Portsmouth from the protocols agreed upon during the negotiations for the signing of the treaty on September 5.

Denison alights from the carriage with Komura and Takahira, arriivng at the Courthouse following the welcoming parade in Portsmouth on August 8, 1905.

On September 6, 1905, following the signing, he visited his hometown of Lancaster, arriving on the 10 pm train on Wednesday night, September 6 and departing at noon on Friday September 8. He stayed at the Lancaster House hotel, dined with Col. & Mrs. Kent at their home on North Main Street and visited the grave of his sister, Frances. 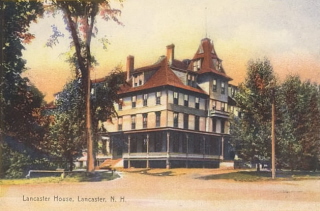 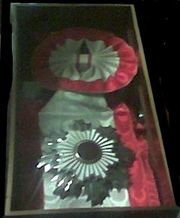 Grand Cordon of the Rising Sun

Henry Willard Denison died in Tokyo on July 3, 1914. On hearing the news, the Emperor held public announcement of the death to allow time to confer the Order of the Chrysanthemum, the highest honor in Japan. He was buried in Aoyama Cemetery in Tokyo, next to Baron Komura and a memorial service is held there annually on the date of Denison's death.

That same year, Hara Takashi, who would be Prime Minister from 1918 until his assassination in 1921 commissioned a bronze bust (below), now displayed in the entry to the Diplomatic Training Center in Sagamihara City, near Yokohama. A portrait, now lost, was commissioned by his friend, Japanese Foreign Minister Ishii Kikijiro. Another portrait, painted by Leslie Thompson in 1937 at the direction of Mrs. Denison's will long after his death, hangs in the New Hampshire Statehouse in Concord, New Hampshire. A bronze death mask is also kept at the Training Center, in a box made of paulownia -- the ceremonial flowering tree that is the symbol of the Japanese Prime Minister, head of the Foreign Ministry. The story of another portrait, rediscovered in Portsmouth, was told by the Japan Times in July 2012. 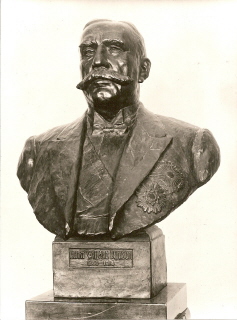 This bronze bust of Denison is displayed in the entry to the Japanese Diplomatic Training Center in Sagamihara.

*Chandler's son, Lloyd, a Navy officer, also became friends with Denison when he was stationed in Tokyo. The three met again in Portsmouth and dined together at Wentworth. Sato, the Japanese delegation press agent, was also good friends with Lt. Chandler, having hosted an elaborate dinner for him in Tokyo.