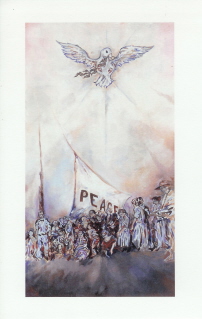 The Sarah Farmer Peace Award (artwork created by Andy Ritzo) is a memorial to Sarah Farmer, the founder of Green Acre. The award "recognizes area individuals who take effective local action to promote world peace and understanding among nations and members of the human family." The award is presented by the Baha'is of the Greater Seacoast Area of Maine and New Hampshire.

The first award, presented on September 21, 2005 to coincide with the United Nations Day of Peace, was given to the Portsmouth Peace Treaty Anniversary Committee for encouraging local residents "to reflect on the importance of peace, not just in 1905, but today." The six recipients include: