In 2011, the theme of National History Day, "Debate & Diplomacy in History: Successes, Failures, Consequences," produced many student projects on the Portsmouth Peace Treaty. The following winners and their projects from their respective states and categories go to the national competition June 12-16 at the University of Maryland:

Educational Resources for the Study of the Treaty of Portsmouth

This website is a now focal point for scholars, recognized by the Library of Congress, a place for posting new research and inquiries into various aspects of the Treaty and its legacy.

In addition to the History of the Treaty, this site contains a catalog of local newspaper headlines from 1905 (the actual clips are available at the Portsmouth Public Library) and a continuously-updated Bibliography to the Russo-Japanese War and the Treaty.

In 2005 for the Treaty 100th anniversary, Northeast Cultural Coop wrote a comprehensive school curriculum that helps teachers present the history of the Portsmouth Peace Treaty to New Hampshire schoolchildren.

The curriculum itself is an intensively researched 200+ page, illustrated binder with accompanying CD of images and map of the Portsmouth Peace Treaty Trail.

The curriculum guide is organized thematically under headings such as The Great Global Game, which puts this period of history and the involvement of the U.S. into the story of what was happening in the world as of 1905. Other sections of the guide include: --Setting the Stage, which puts the war and peace treaty into perspective for teachers who will want to teach about it; --The Russo-Japanese War,which includes details on the war itself, how and why it occurred, with suggested lessons on how to approach teaching about it in the classroom; --The Peace Process,which helps put the local history in perspective with ways to engage students in research to discover how NH played a role in this international event, with biographies of the key players; --The Aftermath, which deals with the negative reactions in both Russia and Japan to the treaty; --Literary Connections,which gives teachers materials from the time period that helps in the interpretation of the events, including works by Mark Twain, Leo Tolstoy, and others. --Other Connections, which includes several lessons on understanding other cultures, women in 1905, geography lessons on Japan and Russia, and information on facts from the time period, such as that the tallest building in the world in 1905 was the Eiffel Tower and that in 1905 Albert Einstein developed his theory of relativity.

Thanks to a grant from the Center for Global Partnership of the Japan Foundation, one copy of the curriculum was provided to each school district in the state. Additional copies are available to interested teachers by contacting Northeast Cultural Coop or the Information Director for the Portsmouth Peace Treaty Forum (sseacord@lemd.com)

His talk, "Teddy Roosevelt's Nobel Prize: New Hampshire & the Portsmouth Peace Treaty" offers insight into why Roosevelt’s trust in Portsmouth to be the 1905 peace-making city was well founded. Negotiations there between the Russians and Japanese ended “World War Zero” and led to a Nobel Peace Prize for the President – America’s first.

Most recently presented to the Stratham Historical Society, the illustrated talk and exhibit panels are an engaging introduction to the subject. One woman at the Stratham talk noted, "I've lived in this area for nearly 90 years and had heard about the Portsmouth Peace Treaty. This is the first time I finally understood why it was so important!"

Click here to learn how your group or business can schedule a "Humanities To Go" talk.

Sherry Wood, night editor of the Union Leader newspaper in Manchester NH and author of "Keeping the Peace" a story for gradeschool children presented as part of the "Newspapers in Education" program in 2005, visits Japan, October 9-19, 2007. To follow her blog on the trip, arranged by the Foreign Ministry of Japan under its International Journalists program. 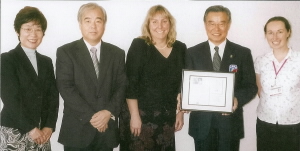 In November 2006, Peter Randall, author of There Are No Victors Here: A Local Perspective on the Treaty of Portsmouth was also the guest in Japan of the Japanese Foreign Ministry's "Opinion Leaders Program." On his return, he presented two illustrated talks -- at Green Acre Baha'i School and at the Portsmouth Athenaeum -- on his visit to Tokyo, Kyoto, Nichinan and Nagasaki. While in Tokyo he gave a recap of the Portsmouth Peace Treaty Centennial events to a group hosted by Yomiuri Shimbun, the largest daily newspaper in the world. He commented:

"I believe it is quite important that we maintain good relations with Japan as Japan has a foreign policy of peace... This was the trip of a lifetime for me." 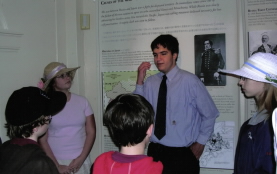 The following is a report on the Tour prepared by Gracie Derby, a student of class 8A.

On May 24, 2006 the class of 8A at Portsmouth Christian Academy (P.C.A.), gave a tour of downtown Portsmouth, highlighting the Peace Treaty which ended the Russo-Japanese War between Russia and Japan.

The students dressed up in costumes of the day. Girls wore dresses with hats that they had made, while boys carried straw hats that a volunteer purchased for them. The students were separated into four groups and gave tours to the fifth graders of P.C.A. that came.

The tour started at the Portsmouth Historical Museum (the John Paul Jones House) then either went up towards Jumpin Jays or the Rockingham Hotel. It took about 45 minutes to go around the town, and then they were allowed 15 minutes at the museum to look around.

To prepare for this tour, the class picked topics that would add to their knowledge of the Russo-Japanese War. Then they wrote down what they believed to be most vital to the tour and added that to a script. Everyone in each of the four groups memorized the information in the script.

On the day of the tour, when the fifth graders arrived, the leader of each group went over safety procedures, while some went into the museum to wait for the first two groups to leave. As they walked they talked to the fifth graders about life in 1905, about the Russo-Japanese War, and the role Portsmouth played during the Peace Treaty.

The eighth graders were excited to give this tour and were very well prepared for the fifth graders. This was a great experience for all who were involved.

On October 26, Mary Reardon will present a workshop on this project at the New Hampshire Council for the Social Studies Annual Conference. The conference takes place at the Center of New Hampshire/Radisson Hotel in Manchester, New Hampshire.

"The world won the peace."