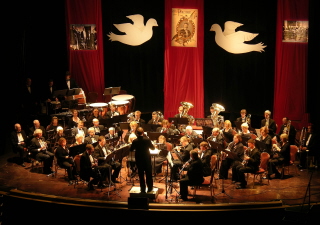 presented by the
Seacoast Wind Ensemble

With members of Portsmouth Pro Musica

Performed by the U. S. Marine Band at the inauguration of Jimmy Carter in 1977:

Performed by the U.S. Army Chorus at the White House State Dinner
Following the signing of the Camp David Accords between Israel and Egypt
March 25, 1979

The 2009 Portsmouth Peace Treaty concert makes connections among unconnected events that occurred recently in late 2008 and early 2009.  Those who attended our first two commemorative concerts recall that we began with the band music heard here in Portsmouth during the month of diplomatic negotiations in August and September 2005, as well as during commemorative band concerts in 1907.  We then proceeded last spring with a focus on the Nobel Peace Prize and the American Presidency, with a speculative look at the legacies of George Washington and Abraham Lincoln.  We remember always that a final outcome of the 1905 treaty was not only a negotiated end to the Russo-Japanese War, but also the first award of a Nobel Peace Prize to an American president, Theodore Roosevelt.  Only two other American presidents have been so honored:  Woodrow Wilson in 1919 for his work toward establishing the League of Nations, and Jimmy Carter in 2002, for three decades of diplomatic achievement in several regions of the globe, notably in the Middle East.

Our mission in the Seacoast Wind Ensemble, however, is also to produce programs of worthy band literature interesting to members and the audience alike!—and making musical connections to the Portsmouth Peace Treaty requires leaps of creativity each year well beyond Washington and Lincoln.  When, in December 2008, the Norwegian Nobel Committee awarded the latest peace prize to a former president of Finland, Martti Ahtisaari, for decades of diplomatic work on behalf of world peace, it evoked right away not only the beginning of a concert with beloved Finlandia, so often sung as a hymn of peace, but also a continuation with music related to the presidency of Jimmy Carter, for the parallelism of the two Nobel Peace Prize awards.  Carter probably should have received the prize in 1979 for his remarkable breakthrough in bringing Anwar Sadat of Egypt and Menachim Begin of Israel to face-to-face negotiations that year, resulting in the Camp David Accords, but committee politics prevented conferral at that time (just as, for example, in the infancy of the Nobel Peace Prize, politics also had dictated the 1906 award against the wish of some committee members to Theodore Roosevelt, known otherwise for a bellicose reputation).  Instead, a quarter century later, Carter finally received a more generic prize in 2002 “for decades of untiring effort to find peaceful solutions to international conflicts, to advance democracy and human rights, and to promote economic and social development.”

In three ways, there was to be no difficulty in finding good band music to remember Jimmy Carter’s many achievements.  First I was able to travel last spring to Washington, D.C., where I met with librarians of the U. S. Marine Band to find out what “The President’s Own” had played during the presidencies of our three Nobel Peace Prize winners, including Carter.  The USMB staff graciously provided extraordinary and extensive assistance, allowing me to take away stacks of paper they had copied from their files, from a program played by the band during the White House wedding of Theodore Roosevelt’s daughter, to pages from concert notebooks compiled during the Wilson administration, to the program for Jimmy Carter’s inaugural ceremony and the White House “play list” during his presidency.  In our tribute to Carter, we begin, then, with a few selections performed by the Marine Band at the U. S. Capitol just before his inauguration in 1977.  The pre-inaugural concert also included the Atlanta University Center Chorus; and we are pleased to collaborate this evening with members of Portsmouth Pro Musica under Priscilla French to bring this music back to life in a recreation of that moment.  Second, the signing of the Camp David Accords in March 1979 was followed by the largest White House state dinner ever held—so large, in fact, that it had to be held in a tent outside on the White House lawn.  Much music accompanied the dinner program, including the astounding performance by the U. S. Army Chorus of a piece specially arranged for the occasion to incorporate an Israeli peace song with an Egyptian chant from Anwar Sadat’s home town.  The arranger, James Kessler, still lives in the Washington, D.C., area, and he was gracious enough to provide us with an unpublished version for mixed chorus (which, incidentally, does not include the Egyptian chant).  The performance you will hear this evening by Portsmouth Pro Musica may well be the first time this piece has been heard since 1979, and the chorus will be singing from Kessler’s own manuscript.  Finally, Carter was obviously a devoted fan of the opera, sponsoring a White House recital in October 1978, for example, by opera star Leontyne Price.  As a result, the White House “play list” for state dinners to be accompanied by the U. S. Marine Band and Orchestra included a sizeable number of opera and show music overtures, medleys, dance music, and popular excerpts—to the extent that it was difficult to make a choice what to play this evening.  In the end, though, it was not problematic to select the fine arrangement for band by Robert Russell Bennett of selections from the timeless folk opera Porgy and Bess by George Gershwin.

Just after Ahtisaari’s award six months ago, the 15th annual Nobel Peace Prize Concert followed in Oslo, Norway, on December 11, 2008, a star-studded affair hosted by actor Sir Michael Cane and actress Scarlett Johansson, and featuring an array of popular artists from Diana Ross to Feist, Dierks Bentley, Julieta Venegas, Seun Kuti, and Marit Larsen.  Band music connections, however, did not emerge from that cast!  Instead, not long after, I sat down on New Year’s Day to watch a different sort of popular concert shaped by longer-standing tradition—that by the Vienna Philharmonic Orchestra, this year conducted by Daniel Barenboim—who pointedly ended the afternoon’s performance with a call for “peace and justice in the Middle East” before the traditional wish for “ein glückliches neues Jahr!”  The day after, I learned sadly that Senator Claiborne Pell of Rhode Island had ended his long and distinguished life also on New Year’s Day.  Having grown up in the state, I had met him on several occasions both in Rhode Island and in Washington, D.C., and was always proud that he was our senator, seemingly forever.  Now, of course, his name is synonymous with the Pell grants that provide government assistance for college and university attendance, and his legacy continues, too, at Salve Regina University in Newport with the 1996 establishment of the Pell Center for International Relations and Publicity devoted to peaceful solution to international conflict (see www.salve.edu/pellcenter).  But I thought as well of his work as Chairman of the Senate Foreign Relations Committee, and the further parallelism of his thirty-six years of Senate service with the Nobel Peace Prize awards to Ahtisaari and Carter.  Pell needed to become a part of our program—and we honor him not with music from Czechoslovakia, for example, where he earlier served as a Foreign Service officer, but with recognition of his additional devotion to the U. S. Coast Guard.  Pell enlisted four months before Pearl Harbor and began his career simply as a ship’s cook.  But it was not long before he became a commissioned officer and then served in the North Atlantic and Sicily, where he helped rebuild the fishing industry.  Following the war, he continued on in the Coast Guard Reserve, retiring in 1978 as a captain.  This connection allows us to feature the fine band music of Lewis Buckley, recently retired as long-standing conductor of the wonderful band in residence at the U. S. Coast Guard Academy in New London, Connecticut; we play, in fact, a piece personally recommended to us by him, and one that provides, as well, a certain international flavor in keeping with the connecting themes of this program.  Buckley remains active, among many commitments, as conductor of one of New England’s finest community bands, the Metropolitan Wind Symphony of Newton, Massachusetts.

Finally, not long into his historic presidency earlier this year, President Obama announced that Senator George J. Mitchell, Jr., of Maine would serve as his special envoy to the Middle East—and our program was finally complete.  Mitchell’s work on the Palestinian question harkens back, of course, to Carter’s work bringing Israel and Egypt to the table in 1979; but this evening we remember his earlier diplomatic achievements in Northern Ireland a decade ago, resulting in the Belfast Peace Agreement signed on Good Friday 1998, and for which he was awarded the Liberty Medal (1998) and the Presidential Medal of Freedom (1999), was invested with an honorary knighthood of the British Empire, and was nominated for a Nobel Peace Prize.  As the final piece in our puzzle of a program, this connection then provided a fine and long-awaited opportunity to perform a wonderful band arrangement of old Gaelic melodies published in 1924 by Irish composer Walton O’Donnell, perhaps the most exciting and substantive piece of the program.