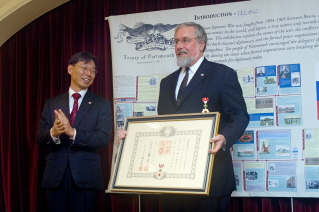 Japanese Consul General Hikihara (left) congratulates Charles B. Doleac after conferring the Order of the Rising Sun, Gold Rays with Rosette in a ceremony at Wentworth By the Sea in Portsmouth NH on Portsmouth Peace Treaty Day.

Press Release issued by the Ministry of Foreign Affairs, Japan, Consulate General of Japan in Boston:

Charles B. Doleac, President of Japan-America Society of New Hampshire, receives Order of the Rising Sun, Gold Rays with Rosette

On June 18th, the Japanese government announced that the Order of the Rising Sun, Gold Rays with Rosette, will be conferred upon Mr. Charles B. Doleac, President of the Japan-America Society of New Hampshire, in recognition of his significant contributions to promoting friendly relations between Japan and the United States of America.

In 1988 Mr. Doleac established the Japan-America Society of New Hampshire to promote mutual understanding between Japan and the U.S. and to strengthen the nations’ friendly relations. He has worked tirelessly since then as President of the society to achieve these ends.

Portsmouth, where the Japan-America Society of New Hampshire is based, was the stage for the peace conference, which ended the Japan-Russo war in the early 20th century. Here, the Treaty of Portsmouth was signed and the war brought to a close. Theodore Roosevelt successfully orchestrated this peace conference, and later received the Nobel Peace Prize.

Mr. Doleac understands that the effort of Portsmouth’s citizens at that time to create a welcoming atmosphere for both Japanese and Russian delegates provides a model for citizen-involvement in multilateral diplomacy’s conflict resolution. Under Mr. Doleac’s leadership, the Japan Society of New Hampshire organized the Portsmouth Peace Treaty Forum, which examines such topics as the significance of citizen diplomacy in the conflict-resolution process, the historical background of the Treaty of Portsmouth, the Japan-Russo war, and current Japan-Russo relations. Through conducting such activities, Mr. Doleac has made efforts to encourage mutual understanding and friendship between Japan and the United States.

When plans were announced to demolish the hotel where the delegates from both Japan and Russia stayed during the peace negotiations (Wentworth By the Sea), Mr. Doleac made great efforts to preserve this historic building. He insisted that the hotel is historically valuable and that passing it down to future generations would further strengthen the Japan-US friendship. As part of the 100th anniversary of the Portsmouth Peace Treaty in 2005, Mr. Doleac organized a community committee that produced a series of significant events which encouraged the deeper understanding of the Japan-US alliance among US citizens, and which bolstered the trilateral ties between Japan, US, and Russia through the Treaty of Portsmouth.

In light of these contributions, the government of Japan acknowledges Mr. Doleac as an appropriate person to receive the Order of the Rising Sun, Gold Rays with Rosette and is delighted to announce the decoration.

The Order of the Rising Sun was created in 1875 by Emperor Meiji of Japan to recognize individuals who had rendered distinguished service to the nation and people of Japan. The actual award is an enameled medallion: “a radiant sun suspended from a paulownia leaf and blossom” (the ceremonial symbol of the Japanese Government) with a gold rosette, presented in a black laquered box.