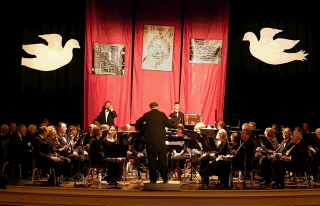 Portsmouth, New Hampshire (June 1, 2009) -- On Saturday, June 20th at 8 pm at The Music Hall in downtown Portsmouth, the Seacoast Wind Ensemble presents "Peacemakers & Diplomats," a program of music celebrating Nobel Laureate Jimmy Carter, Senator George Mitchell and the late Senator Claiborne Pell (RI) "in the spirit of the Portsmouth Peace Treaty." Guest artists, Portsmouth Pro Musica will join in music from the Carter administration Camp David Accords celebration. The annual program by the Seacoast Wind Ensemble (www. SeacoastWindEnsemble.org) is organized and conducted by Music Director Richard C. Spicer and sponsored by the Portsmouth Peace Treaty Forum, supported by the Japan-America Society of New Hampshire. Tickets are $15 ($5 for seniors, students and children under 12) and are available at The Music Hall Box Office, 28 Chestnut Street, Portsmouth, by phone 603-436-2400 and on-line at www.themusichall.org

Richard Spicer, Music Director for the Seacoast Wind Ensemble and music historian has spent the past year researching music for the program. During a visit to the US Marine Corps Band library in Washington, DC he found the programs - and complete musical scores arranged for band - from the Inauguration of President Jimmy Carter, who would win the 2002 Nobel Peace Prize for bringing peace between two warring countries, as President Theodore Roosevelt won the 1906 Nobel Peace Prize for the Portsmouth Peace Treaty.

Mr. Spicer also found the program from the White House State Dinner on March 25, 1979, that celebrated those Camp David Accords, including a performance by the U.S. Army Chorus of an arrangement of traditional Egyptian and Israeli folk songs. That gave him the inspiration to invite local chorus Portsmouth Pro Musica under the direction of Priscilla French as guest artists for the June 20th concert to perform the piece. Then the challenge was to find the music needed to perform. "I began looking for the music that was arranged for the original concert, which led me to the original Army Band arranger, James Kessler, who is now retired," said Spicer. "To my delight and gratitude he agreed to provide the arrangement for chorus and the Ensemble. So we will be performing music specially arranged for the Portsmouth Peace Treaty concert, created by the same man who arranged the Camp David Accords concert."

Other selections on the program honor Senator George Mitchell, now special envoy to the Middle East, who helped negotiate the Northern Ireland peace accords and Senator Claiborne Pell of Rhode Island (who died on January 1, 2009), founder of the Claiborne Pell Institute for International Relations and Public Policy. In addition to participating in the San Francisco Conference that created the United Nations, Senator Pell was the only member of the Senate to have been a Foreign Service Officer, with eight years in the diplomatic service including posts in Czechoslovakia following the Communist takeover. Senator Pell was also the principal sponsor of a 1965 law establishing the National Endowment for the Arts and the National Endowment for the Humanities. A performance of Sibelius' "Finlandia" commemorates the 2008 Nobel Peace Prize winner, Martti Ahtisarri, former President of Finland. "The Portsmouth Peace Treaty is an important piece of history as the foundation for Theodore Roosevelt's Nobel Peace Prize and as an early demonstration that the ordinary American citizen can make a difference," said Charles Doleac, chairman of the Portsmouth Peace Treaty Forum. "This annual commemorative concert helps trace that story from a musical perspective."

To learn more about the Treaty, scheduling lectures, exhibits or programs, visit www.PortsmouthPeaceTreaty.com