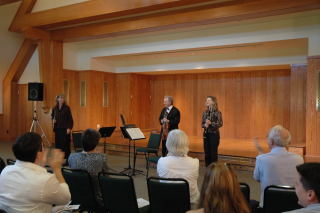 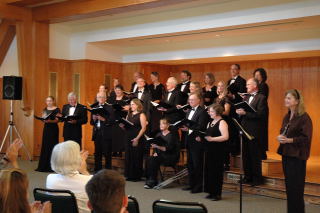 In 2004, the ensemble performed a series of concerts featuring works inspired by political events of the 20th century including the Prokofiev Quintet Op. 39, the Suite of Randall Thompson and the haunting Abyss of the Birds from the Quartet for the End of Time by Oliver Messaien. The performances were received with such overwhelming response that the ensemble was selected to perform and discuss the Prokofiev Quintet as clinicians for the 2005 NH All State Chamber Music Festival.

Suite, Randall Thompson
Gaio
Adagio
Assai Allegro
Lento Religioso
Grave/Allegretto
Infinities 32 , Meyer Kupferman
Allegro
Andante
Tranquillo Vitamente!
Abyss of the Birds, Oliver Messiaen from the Quartet for the End of Time
Three Short Pieces, Michael Starobin
Allegro Con Brio
Blues
Molto Allegro
Amare Cantare takes its name for the Italian expression that means to love to sing. Amare Cantare is a 25-voice auditioned chamber chorus based in Durham. Its purposes are to present concerts of choral music on a high artistic level in the Seacoast community and elsewhere, to provide members with the opportunity to enhance their musical skills and knowledge and to promote choral music through public performance. The ensemble's repertoire includes both sacred and secular literature and ranges from Renaissance madrigals, Bach motets. Romantic part songs to contemporary a capella literature, folk songs and popular favorites. The emphasis is on a high standard of performance with most works sung in their original languages. Amare Cantare's performs three major concerts series each year and additional paid engagements. The group draws its members from all over the Seacoast area and beyond, ranging from Exeter, to York ME, to Freedom, NH. Catherine Beller-McKenna, Music Director

Green Acre Baha'i Conference Center was founded by Sarah Farmer, who dedicated it in 1894 to the ideals of peace and religious unity and then raised the first known peace flag in the world. In 1905, both Russian and Japanese members of the peace treaty delegations visited Green Acre. Sarah Farmer was the only woman to witness the signing of the Portsmouth Peace Treaty on September 5, 1905.